The festival of Santa Rosalia in Palermo, Sicily

Home » Events » The festival of Santa Rosalia in Palermo, Sicily

We have an advertising relationship with some of the stores we link to on this site. Your prices are not affected! 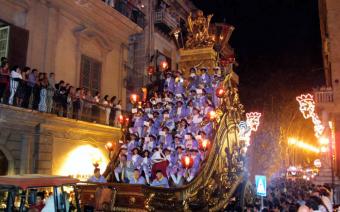 Saint Rosalie was born in Palermo, in the year 1130 of a noble family, descendent of Charlemagne. At a very young age she retired to a solitary life, in a cave on Mount Pellegrino, a hill facing east on the bay of Palermo, where she died in 1166.

In 1624 when the plague infested Palermo, the Saint appeared and guided a hunter to the cave where her remains were to be found and suggested that he brings her bones to the city and carry them around in a procession.

The Santuzza- the little Saint- miraculously saved the people of Palermo and since then Rosalia was venerated as Saint Rosalie and as the patron of the city.

Two feasts are celebrated to honor St. Rosalie: the Festino, the big feast, which goes from July 8th to July 17th, and a festival on September 3rd and 4th.

The September event is celebrated with processions and prayers as the faithful walk the steep road called Strada Vecchia, the old path, to visit and venerate the Saint in  the cave, now a Sanctuary, on Mount Pellegrino where the relics of the Saint where found. On the night of the 3rd, the devotes go to the cave in a procession illuminated with torches, praying to Saint Rosalie for favors or to thank her for graces received. The 4th is a religious holiday and it is celebrated in the Sanctuary and in all churches in Palermo.

The Festino, la Grande Festa, goes from July 8th to July 17th.For the occasion a big barge is built with the statue of the Saint in the square outside the Cathedral; the statue remains covered with a veil until the 13th, when the rituals start with sermons, prayers, hymns and concerts, with the participation of the people, and the clergy.

On the 16th, after religious celebrations with Mass, singing and praising the Saint for the miracle over the plague, the day is concluded when the float leaves the cathedral and takes the carro trionfale to the Foro Italico, with a stop over at the Quattro Canti, the geographical center of Palermo, where the city mayor, organizers of the Festino and important members of the community express thanks and honor the Saint.

The procession ends at the large open area at the Foro Italico where at the imploration, “Viva Palermo e Santa Rosalia” a big and spectacular firework starts, coupled with live symphonic music.

The 17th is mostly a religious holiday culminating with a float, where the relics of the Saint are carried by the faithful in the streets of Palermo: this procession lasts all day and concludes the festivities.

During the Festino in the street of Palermo, you can smell the odor of the wild fennels, and in fact the pasta with sardine and fennels is rigorously prepared in every household. Also the babaluci, little snails are cooked for the occasion; the snails after being thoroughly rinsed many, many times, are steamed with garlic and parsley.

In Palermo, for the duration of the Festino, it is customary to take walks at Foro Italico, also known as la Marina; for the occasion in this vast area there is a presence of a large number of kiosks where street vendors display their merchandise and food stuff.

For me and for most people from Palermo, it is very hard to separate the Festino from the cuisine of the well-liked street food. At la Marina you can savor the sfincione, the characteristic bread dough covered with onions-tomato sauce and caciocavallo, anchovies oregano and breadcrumbs; many kiosks display boiled octopus or mussels steamed in sea water, served with sliced lemons and numerous stalls selling the babaluci, not only favorites for the intense taste and for the strong flavor of garlic and parsley, but because the babaluci are inseparably associated with the Festino.

The little snails are consumed in large quantities. These finger foods are sold in little dishes and eaten while walking around exploring other kiosks with many tempting delicacies on exhibit or in search for an ideal location to look at the firework display. Mountains of watermelons are exhibited at the “mulunaru” the watermelon seller, slices of the fruit are laid on a bed of ice and offered for sale.Nearby the fichi d’India, prickly pears are displayed by color and some are placed in a vat with ice, ready to be peeled and served.

And then the true Palermo specialties are available in many places: vastedde, panelle, potato croquettes and for the more audacious the heads of lamb.

Other kiosks offer boiled pullanchelle, plumy and milky corns in their husks, luppini, pickled lupine beans, cubbarda and minnulata, nougat made with sesame seeds or almonds, and other exceptional morsels like bomboloni, Sicilian doughnuts, iris, fried dough stuffed with ricotta cream, or the gelato di campagna, made with sugar, honey, roasted nuts and chopped candied fruits.

Not to be forgotten i semenzari, who sell pumpkin seeds, calia, roasted chick peas, roasted fava beans, toasted almonds and noccioline Americane, toasted peanuts.I semenzari, the seeds vendor make fantastic displays of their products with very large quantities of seeds offered with salt, with little salt or without.

When the firework display ends, there is a feeling of melancholy in the air but then when everybody shouts Viva Palermo and Santa Rosalia, the people start to walk around looking for a cold drink or for prickly pears or a slice of watermelon, before concluding the Festino and hoping that next year will be more spectacular.

Looking for Italian groceries and products? Visit our online store guide or find a store near me.

This information and photo has been provided by Sicilian Cooking.

Share in the celebrations by preparing one of the following recipes. Join in the Fun!